Why Standardized Tests Aren’t Working for Teachers or Students 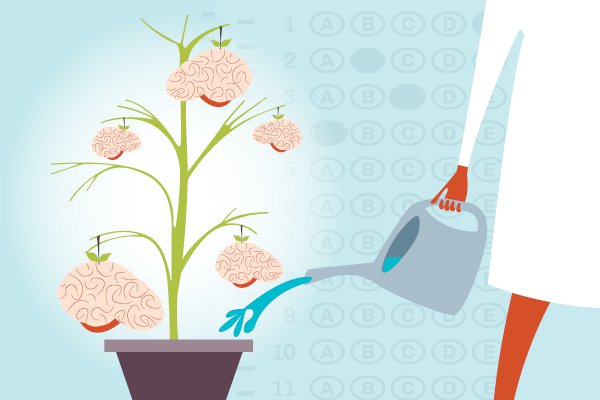 Many of us in education have deep misgivings about the role standardized tests play in our schools. As a principal, I’ve had a front-row seat to incidents that illustrate why we should be seriously concerned. Let me tell you about one of them.

He pointed out that in one of my four kindergarten classes, the student scores were noticeably lower, while in another, the students were outperforming the other three classes. He recommended that I have the teacher whose class had scored much lower work directly with the teacher who seemed to know how to get higher scores from her students.

Seems reasonable, right? But here was the problem: The “underperforming” kindergarten teacher and the “high-performing” teacher were one and the same person.

I had just two kindergarten teachers. They each taught one morning and one afternoon class.

The idea that I should have the “high performing” teacher coach her lower-performing colleague was suddenly very concerning to me, not to mention impossible. It was clear to me that I couldn’t use standardized tests to distinguish high-performing from low-performing teachers. And this incident fed the doubts that I already harbored about using those same tests—which are meant to be “scientific”—to measure student learning.

I am married to a scientist. He runs tests on plant pathology, analyzes the results, draws conclusions, and uses the results to develop solutions to the problems he studies. I am in awe of the tidiness of the whole process.

I, on the other hand, am an educator. At best, every child is an experiment of one. We test the children’s learning with admittedly limited instruments—standardized tests—that were never designed to be used as a standalone analysis. A lot of classroom time is dedicated to preparing for these tests and giving them. Results are affected by dozens of variables that we can’t control: illness, hunger, sleep deprivation, unfamiliar forms of a test, limited command of English.

While my husband carefully chooses which plants and which growing conditions to use in his studies to get more accurate and replicable results, I cannot even begin to predict which variables have the most impact on any individual student when she takes a standardized test on any given day.

However, in our best attempt to mimic scientific experiments in education, we insist on measuring the success of a learning intervention by students’ standardized test results. These are the very same tests that have let us down by failing to accurately capture what a student knows and can do.

Many people say that we use these tests because we have no better way to measure learning. That’s not really a good answer, much less a reason to draw conclusions about the effectiveness of an intervention, or worse, about the performance of a teacher.

Occasionally I’ll hear a story about a student whose abilities teachers vastly underestimated, and then a test at school finally revealed the level of his or her true capability. I do not doubt those stories.

But my own experience of watching tests and students for many years is that standardized test results underestimate large numbers of students as learners, especially those who belong to minority groups. Most often, it’s the teacher—not the standardized test—who will recognize a student’s true abilities and understand that the student simply is unable to demonstrate on the test what she knows and can do.

Teachers—good teachers, who are with students day after day through all the variables of learning—are far more likely to know not only what a student can do but also how to increase his learning. If we focused on that and worked to build our strength as identifiers and promoters of children’s learning, we could have a real impact.

I fear that the charade of saying testing can inform instruction has diverted us from exploring what can really make a difference in a child’s learning. And the precious little time we have to bring children as far as possible, to nourish their potential, to have them become capable of successfully navigating whatever world they will live in with confidence as a lifelong learner, is simply not a gift to squander. As sociologist William Bruce Cameron wrote, “not everything that can be counted counts.”

Margaret Pastor is the principal of Stedwick Elementary School in Maryland. She has more than 35 years of experience in education, and is the co-author of One School’s Journey, about teaching through authentic projects.